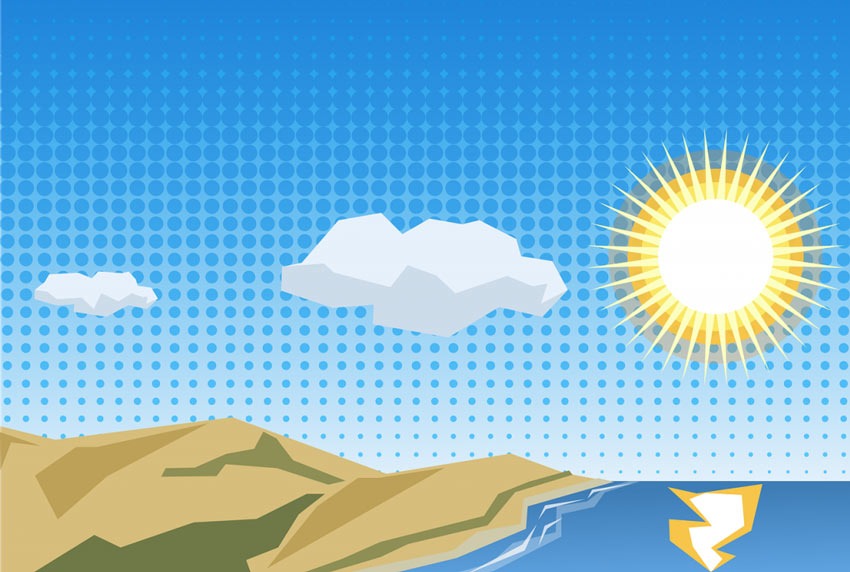 Portugal or Spain? Two tax regimes for non-habitual residents to consider in the EU

In the last decade, both Portugal and Spain have created very attractive tax regimes for non-habitual residents, the aim being to attract highly-qualified professionals and high-net-worth individuals, and thereby generate additional income for their economies.

Generally speaking, in Portugal, income from wages earned in Portuguese territory is taxed at 20%; income from outside Portugal is exempt and there is no maximum threshold. This also applies to private pensions from foreign sources. Anyone wishing to opt for this regime must prove that they have not been resident for tax purposes in Portugal in the last five years, and once they have been registered, the said non-habitual resident will benefit from the regime for 10 years, whenever, in any given year, they meet the residence requirements in Portugal.

In Spain, income from wages is subject to a general taxation rate of 24% up to a maximum of 600,000 euros, rising to 45% once this threshold has been exceeded. Furthermore, income from wages will be taxed globally, irrespective of where such income was generated, and this includes pensions.

Anyone wishing to opt for this regime must prove that they have not been resident for tax purposes in Spain in the last 10 years. Once registered, they will be able to take advantage of the regime for six years (the year of notification and the next five years).

Any dividends, capital gains and other income from capital will be exempt from taxation in Spain whenever they have been obtained outside Spain and there is a double taxation agreement between Spain and the country of origin of said income. Income earned in Spain will be taxed at a rate of between 19% and 23% depending on the amount.

Anyone who has assets in Spain is obliged to pay Spanish wealth tax. (Except for the Community of Madrid).

You can read about each of these regimes in more detail below:

In 2009, with the aim of attracting foreign investment, qualified professionals, foreign pensioners and high-net-worth individuals to Portugal, the Portuguese government created the so-called non-habitual resident regime. The regime is regulated by Article 16 of the IRS (personal income tax – PIT) Code and was introduced by Decree-Law 249/2009 of 23 September.

To qualify for this regime, individuals must be able to prove that they have not been resident in Portugal for tax purposes in the last five years and establish tax residence in Portugal. Generally, anyone who spends more than 183 days per year in Portugal can establish tax residence in the country; it is even possible to do so when spending less time in the country, as long as the individual has a dwelling here and the indications are that they intend to keep it and occupy it as a habitual residence.

The deadline for registering for the regime is the 31st of March, inclusive, in the year following that in which the individual becomes resident in Portugal. Once approval has been granted by the Portuguese tax authorities, the regime will remain in force for 10 years.

Whenever income from wages earned in Portuguese territory is deemed as generating high value added of an artistic, scientific or technical nature, it will be taxed at the rates shown in the following table: 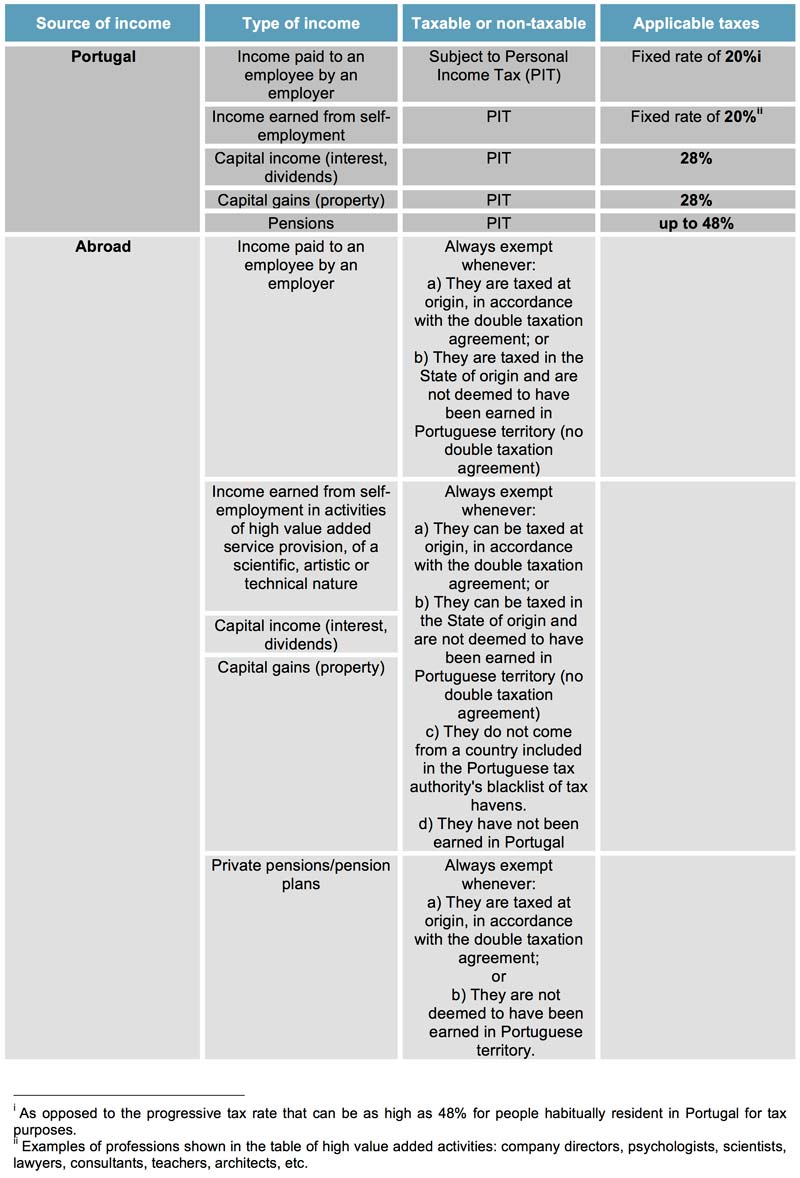 Other tax considerations of interest:

Portugal abolished inheritance tax on 1 January 2004. All members of the family (spouse, children, grandchildren, parents and grandparents) are exempt from tax on free transfers by donation or inheritance.

Consequently, in Portugal, spouses and direct descendants and ancestors are not subject to tax on assets that are transferred to them as a result of a death. Not-for-profit transfers of assets between living people are subject to 10% stamp duty, except for transfers where the beneficiary is a spouse, descendant or ancestor, such transfers being exempt from stamp duty.

It should also be noted that there is no wealth tax in Portugal.

The special regime for migrant workers, now widely known as the “Beckham Law”, was passed in Spain in 2004, with the aim of boosting the country’s economy by attracting directors and qualified personnel from abroad. This basis for attracting foreign talent created the perfect scenario for the signing of footballers, and the first to take advantage of it was David Beckham, hence the law’s nickname. For this reason, the rules were changed in 2015 and elite athletes ceased to be eligible, although the changes did not have any retroactive effects.

The Spanish tax regime applicable to expatriates is regulated by Article 93 of Law 35/2006, which governs personal income tax. Under this rule, anyone wishing to opt for the aforementioned regime must meet the following conditions:

The deadline of six months from the start date of the activity in Spain (and not from the date on which tax residence is finalized) to apply for this regime must be strictly adhered to because neither the tax authorities nor the courts will grant access to the regime after the deadline has passed. Under this option, the regime will remain in force for six years (the year of registration and the five years thereafter).

Income earned by an expatriate living in Spain will be taxed as follows: 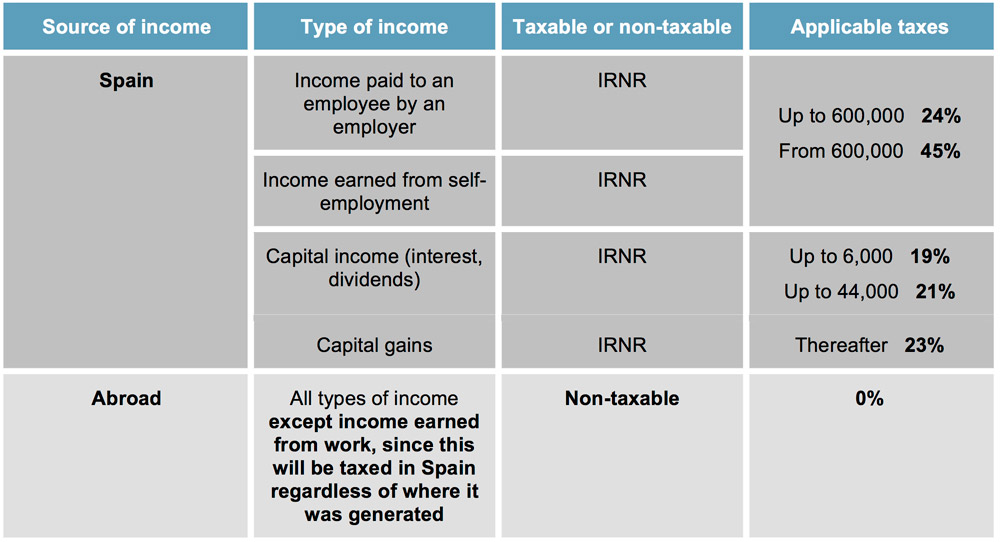 Other tax considerations of interest:

Unlike Portugal, Spain has a wealth tax and beneficiaries of the special regime must declare and pay the wealth tax only on their assets in Spain.

As regards the tax on inheritance and donations, beneficiaries of the “Beckham Law” who are resident in Madrid can benefit from the corresponding allowance from the Autonomous Community, in the same way that applies to the wealth tax.

They are also obliged to submit the Banco de España’s foreign transactions statement, which is mandatory for anyone who is conducting economic transactions with non-residents or who has financial assets or liabilities abroad, and Model D for statements to the Investment Register of Spanish investments abroad in companies listed on the stock exchange or the organised market, when the sums are deposited abroad or remain in the custody of the owner of the investment.

They are not required to submit the statement of assets abroad, through model 720.